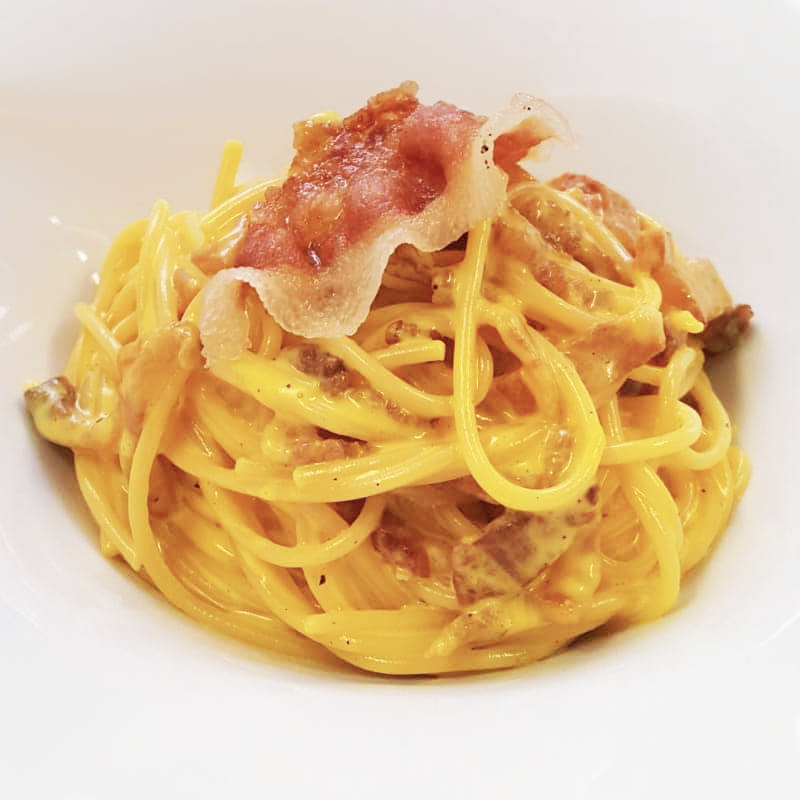 Boil a pan of water and when it is up to temperature add the half rigatoni. Add a little salt to the water.
The pecorino cheese and the pork cheek/rigatino will in fact help to give the right flavour to the dish.

While the pasta is cooking, cut the pork cheek/rigatino into cubes or strips after removing the rind.
Heat a non-stick pan and sauté the pork cheek/rigatino without adding any other fat.
The secret here is cutting the meat: don’t make it too thin, but thick enough to leave it crispy on the outside. Turn off once it has become crispy.

In the meantime, let’s prepare the sauce. One of the rules for portioning is to add one egg yolk each. With this portioning the pasta will be very creamy.
Beat the egg with a fork and add the pecorino and grated cheese, mixing everything well until the consistency is nice and creamy.

For the fried egg, separate 4 yolks from the egg white, place each one in a cup covered with breadcrumbs and place in the fridge for 4 hours.
Fry them in lots of oil for 40 seconds so that the heart remains warm and creamy.

Serve the carbonara half rigatoni, placing the breaded and fried egg on it while still hot, a few crispy strips of pork cheek/rigatino that you have left aside and a little freshly ground pepper.

This website uses cookies to improve your experience while you navigate through the website. Out of these, the cookies that are categorized as necessary are stored on your browser as they are essential for the working of basic functionalities of the website. We also use third-party cookies that help us analyze and understand how you use this website. These cookies will be stored in your browser only with your consent. You also have the option to opt-out of these cookies. But opting out of some of these cookies may affect your browsing experience.
SAVE & ACCEPT